Dalila Hiaoui is a poet, professor of the arab language and culture, and she works for the United Nations in Rome. Born in Marrakesh and resident in Italy since 15 January 2005. Since January 2nd, 2002, she organizes and runs the bilingual literary salon, “J’nanArgana” (paradise in Argan) in Italy and other countries. She has had 44 books published as author and co-author (poems, stories, and a theatrical “pièce”, and a three volume manual in Arabic with the International University Uninettuno), and in 2019 she was selected among the most 100 famous women in Rome. Her poems in Arabic, her mother tongue, have been translated in Italian, English, Classical Chinese (Mandarin), Albanian, Serb, Bangal, Spanish, Berber, Turkish, Nepali, and a few texts are translated into French. Dalila is manager of the online cultural journal Dar Argana, and she contributes to other arabic magazines and papers as opinionist and writer.

She has created together with the international telematic university UniNettuno, television language courses: I Learn Arabic – treasure of letters, (already shown on national television in Morocco, Canada, on the University’s channel, on Rai 2 and digital television since 2010).

Dalila has been organising since November 2017, together with other poets, solidarity caravans to aid schools, pupils and the population which resides in the North East mountains of Morocco. 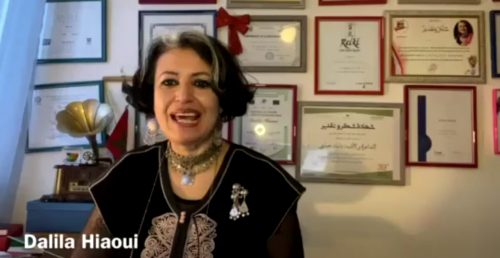 If I have decided to go away

It is not because I have been shunned by my similars

Or because my friends are indifferent

But to mend the fragments caused by stupidity

With bullets of delusion….

In the wells of hypocrisy.

When the eagle rebels against the precipice and flies upwards

It remains alive and makes its nest

You have buried my happiness.. Since I was an infant

And you have annulled all my youthful dreams.

You have shown the ugliness of your canine teeth

And have filled my little world with howls.

So light up the wick of your disgrace

And, as if they were rain, wet me with your unhappy meteorites.

Accumulate clouds as if there were wishes

And make the sky above me make thunder and lightening.

Crush with your right hand the gardens of my family

And gather up effortlessly with your left hand my flowers.

Give me no truce, give me no respite.

Between any deaths and sadness forbid spates of crying.

And don’t listen to my prayers

Don’t be afraid of me.

From you, life, I have received but alienation.

In your Constitution an article…

Which makes me a lady exactly there, where my city is.

Which will guarantee me all rights possible

So that the members of my tribe don’t lacerate my wounds!

Otherwise i won’t come back to you!

I won’t come back to be locked up

Against my will in my absence.

I won’t return to you!

Rip up my lands.

Prevent my tongues from expressing themselves

or protect my punishment from the moss.

If you don’t create a whole article for me